If my cabinets are cluttered, it's probably Debbie Reynolds fault.

Growing up in Colorado, I was very aware of the story of Margaret Brown - a child of Irish immigrants who grew up very poor, promised herself she'd marry for money but then fell in love with and married a child of Irish immigrants who was also very poor. Of course the reason we know about them is that they didn't end up poor at all - because her husband discovered a gigantic seam of ore and the owners of the mine he worked at rewarded him with a bunch of money, stocks and a position on the board of the company.

If you're not from Colorado (or maybe if you are) you probably know her better by the nickname given to her by the folks who wrote a musical about her, Molly - as in The Unsinkable Molly Brown. Remember Debbie Reynolds jumping on the bed and screaming "And if that house is red and has a big brass bed...?" Of course, the real Molly Brown probably did not jump on her bed at all - most poor people who get money sort of appreciate the furniture - but she did do all kinds of amazing things including survive the sinking of the Titanic, fight for women's suffrage and show the old-school socialite Denver beeshes a thing or two about how real ladies should behave. The house she had in Denver is now a museum and is just a few blocks from mine, so I pass it all the time and think of her.

Mostly what I think about is that the very first time her husband brought home a pile of money, she freaked out. She didn't know where to keep it. She'd never had any and thought she should hide it. So she put it in the most secure place in their meager cabin, the place no one would ever look: The stove. You know where this is going, right? Her husband comes home from celebrating with the boys, decides to warm up the place, starts a fire and burns up their newly acquired fortune. 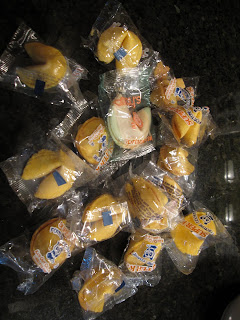 Because of Molly Brown, I find it impossible to throw away a fortune cookie. Because what if one of them says, "you will discover a seam of ore" or "hey dumbass - you left your wallet in the stove." I don't feel obligated at all to EAT them. Or even read them. But I keep them. Which comes in handy when there's nothing for school lunches or the trick-or-treat basket runs dry, but otherwise, even I gotta admit it's really, really weird.
Posted by Little Girl::Big Glasses at 8:06 AM 3 comments: 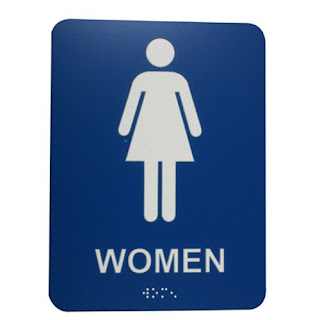 Every woman out there. Save your thigh muscles for the gym. Relax. Put your bare ass on the seat and pee in the water, friends. It will be liberating. It will be tidy. It will put the creepy wax paper toilet seat cover people out of business. Which is probably an eco-friendly gesture. You'll save the planet and little girls all at the same time.
Posted by Little Girl::Big Glasses at 7:39 AM 7 comments:

After what Blogher Ads purports to be years of inactivity (only three weeks, gah) the LGBG spaceship has finally landed back home. We've experienced a whirlwind trip to Kansas for a baseball tournament for nine-year-olds (and felt really sorry for ourselves until we played the team that drove there from frickin' Canada) we spent a relaxing week by a lake with only one trip to the emergency room, and Big Dude and I were treated to a quick getaway to the hotel where we spent our wedding night...all which means we spent more time in strange beds than our own in August. Which is pretty much like college, only with clean sheets. That's a joke, mom.

This week has been the mad rush for football gear that fits, buying sh'loads of school supplies that will be returned back home in May completely unused except for broken colored pencils, the where-the-hell-is-your-lunchboxing, oh shit you both need haircuts and what? Your shoes don't FIT? Then, mercifully, finally, and with great gusto: the first day of school. Ahhhh.

Seems like if I really was a nice person, a real blogger or someone who really was on top of things, I could've maybe gotten some guest posters to write clever quips about me or tell embarrassing stories of how my skirt got tucked in my pantyhose at Blogher '06, only I've never been to Blogher and I don't wear pantyhose. Or I would have left you all with something better than the turtlevator story to read for lo these past weeks, huh? Well, imagine your surprise, little miss smarty-reader-pants when I tell you that I've been contacted by a major online and television direct marketer who wants to produce and market the TURTLEVATOR (patent pending, registered trademark) as the next big thing since the Shamwow? Imagine my surprise as well. And PETAs. Okay, that didn't happen, but I bet you totally could sell at least of few of them if you put it on right in the middle of the Spongebob "Band Geeks" episode. However, I will say that the Turtlevator (pp & rt), while limited in its ability to provide comfort to aquatic reptiles, is simply dandy for sending up last minute drinks of water at bedtime, DS games, and rolls of toilet paper. And, I am currently working on a prototype with much larger mardi gras beads that will be able to handle laundry baskets full of clean towels.