So, if you're a PETA member or otherwise like small cute furry things you should probably move along. I think there's a baby photo blog next if you just push that little "next blog" button up there.

It's autumn in Colorado which means several things,
1) dark beer
2) peaches
3) youth/college football
4) sweaters make it possible to gain 10 pounds eating cheese
5) all the little freaking furry rodentia that spend their summers frolicking in the sunshine try to suddenly converge on my house.

I have mentioned my overall general un-love for the creatures. In this post, and then again in this one, I chronicle my efforts to rid the world of their creepy little poky noses and weird feet. Their whiskers? Pretty cute, admittedly. But not cute enough to lessen my urge to smash them flat with an Acme safe.

This weekend, as I yelled at children about laundry and drank whiskey to ease the pain of the drudgery that is my life sat peacefully in a reading chair with an afghan and green tea, the gigantic middle schooler ran into the house, "MAWM! Where's the bb guns?"

This is aligned closely with other questions I dread, such as "MAWM - we got any glue?" And "MAWM - which is it I'm not supposed to date, debate team girls or cheerleaders?"

I steeled myself. "Ummm. Why, pray tell?"

Sidebar: I try to use phrases like "pray tell" in everyday conversation with my children. It not only helps keep outdated language alive, but it also makes them look nerdy to both debate team girls and cheerleaders.

The 165 pound cherub retorted, "There's baby mice all over the patio!"

To which I replied, "The bb guns are in the camper, son. Getcher pellet gun."

And then, because we are all about safety over here, I added..."but wear eye protection!"

Spoiler Alert:  the mouse in this neighborhood are safe. Apparently, while my children can hit flying clay targets at 30 yards, little furry things 5 feet away pose too much of a challenge.

However, if those little bastards with cute whiskers cross the threshold of my house, it's bets-off, Mickey. I'm bringing out the big guns.

Dude. I'm sick of him taxing my gig.

So, starting today, no more Bulldog Haiku on LGBG.

He's got his own blog, like any self-respecting flat-faced pooch would.

If he gets more followers than me, I told him he could sleep on my bed. 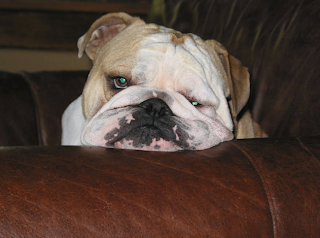 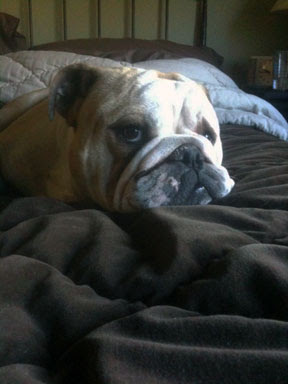 And that, Officer, is why I'm driving erratically.
Posted by Little Girl::Big Glasses at 2:44 PM 11 comments:

Q&A for some of the residents in my home.

Q:  Where is the laundry chute located?
A:  In the upstairs hallway, directly behind the pile of your dirty clothes.

Q:  You want a bowl of cereal, but when you look in the cabinet, there are no clean bowls. What do you do?
A:  Eat directly from the box. Preferably in the living room. Laying on your back while watching MTV2.

Q: Two cute girls from school are standing on the front porch. They want to jump on the trampoline with you, but you've not picked up the dog poop in the backyard for two days. What do you do?
A: Who cares? You're watching MTV2 and eating cereal.

Q:  You're returning to the living room after fetching another box of cereal. How can you determine exactly where you were laying before?
A:  By the outline of your body made of cereal crumbs and the empty box.

Q: Where is your underwear drawer located?
A: Look in your room for a large piece of wooden furniture under a pile of electronics, empty cereal boxes and remote-controlled vehicles. Lift the stack of folded underwear and you'll find a pair of pajama pants. Lift the legs of the pajama pants and you'll see the top drawer.  You'll know it is the right one if it is completely empty.
Posted by Little Girl::Big Glasses at 12:42 PM 9 comments: 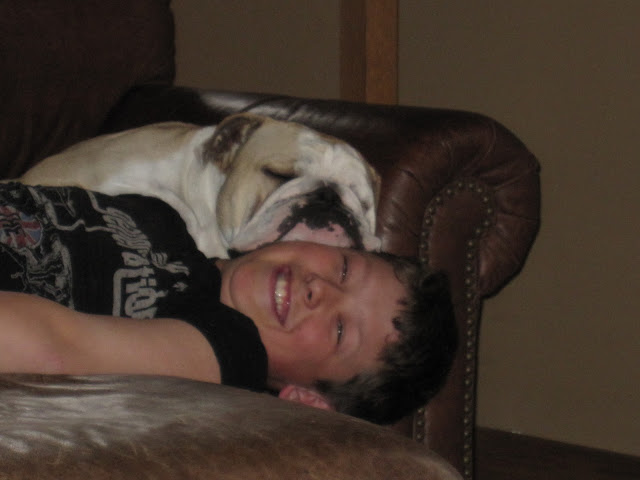 Sometimes it's better
To hold them down and feign sleep
They grow up too fast.
Posted by Little Girl::Big Glasses at 5:03 PM 2 comments:

Is this heaven? No. It's Iowa.

If you read the post I wrote yesterday - I hope you remember it well, because I've taken it down. Although LGBG is often silly rants about things, I don't want it to be about people. Not cool. So, it was a limited edition collector's item post and it's no longer available. Maybe you can find it on eBay or something.

What I should've been ranting writing about was last weekend! Because it was nearly almostly as fun as I thought it was going to be. Most of the parts anyway.

It began at midnight Thursday.

I drove across town and put the gigantic middle schooler on a bus.

Then I came home and slept for a few minutes then got up and said goodbye to the future politician kid.

Then, I got on an airplane.

And I didn't get off that bitch until it landed in Iowa, baby. Then I found a shuttle where a guy who was going to his 55th class reunion completely ignored me because I'm a girl and totally monopolized the conversation of everyone in the van. So when we got off and he looked down his nose at me I made sure that I tipped the driver way more than he did right in front of him. So there, old dude.

And then I checked into a historic hotel in downtown Des Moines called the Savery. Have I told you I really like historic hotels? I do. Most of them aren't that nice room-wise, but the lobbies, lawdy. I highly recommend old hotel lobbies.

Then she finally texted me and I felt better. It went something like this:

Tracey: I could sure use a beer right now.
Penne: There's no minibar in my room. I should've had drinks on the plane.

Long wait. I'm bored again. Stupid Iowa. But I find a good movie on TV with that kid in it who used to be on Third Rock from the Sun but in this movie he's all grown up and he's an architect only he writes greeting cards for a living and  I start thinking...hmmm, it's kind of weird that I'm going out for dinner with someone I've never ever met ever, I think I should order room service and finish this very awesome movie with the Third Rock from the Sun kid in it. Only all grown up.

But then I get this text:
Tracey: We're five minutes away! Will pick you up in a white Explorer.
Penne: This feels like eHarmony a little bit.
Tracey: Nope. Match.com!
Penne: I just flashed a white Explorer. Totally wasn't you.

And then she pulled up and I actually met a real life person, not just a blog. She was funny and awesome and if she lived on my block she and Spanxy and I would be a FORCE, I tell you. All through dinner one of us would say "You should know this about me..." and then the other one would say, "OMG, me TOO" and we laughed so much our cheeks hurt. And then we said goodbye, but hopefully not forever. I love Iowa.

I shall report on the kid's regatta at another point - but you should know that Iowa in the morning is pretty lovely.