I know of a man whose ashes reside
In a box
in a bag
in a car.
His earthly remains tombed in white polyethelene
instead of a staid earthen jar.

He was put there one day by his third wife, Joan
who just wasn’t sure what to do
when handed a box with her husband inside -
Sprinkle him, bury him? She must think this through.

So she covered the box with a grocery store sack
To contain any possible spills
And set him on the back seat of a Toyota Corolla
With a blanket in case he got chilled.

She phoned all his children (of which there were many)
Whose love he would quite often brag
But they all curtly balked at taking their father
Leaving her quite literally holding the bag.

The last seven years of his life he existed
Locked up in a room with no view
With others just like him,
Bright eyes trapped in bodies
Not moving like they used to.

Now he enjoys quiet evenings alone
In a parking lot covered with stars
And day time with Joan as she putters about
Riding ‘round in the back of her car.

There’s no final resting place when you have errands
Must get groceries, the prescriptions, mail a letter.
He is certainly dead, the man in the box
But quite frankly, this life is better.
Posted by Little Girl::Big Glasses at 9:15 AM 5 comments:

I feel so alone.

When I was a little kid in the 70s, it seemed to me that the world ceasing to exist was a very real problem. I'm sure there were some bright spots in the movies and tv shows released in the day, (Hiya Herbie the Love Bug!), but what stands out most in my mind are the made for tv movies where the earth blows up, aliens mutilate all the cows, we have to eat each other, or all the above. I lived each day as if it were my last, but not in the good way where I was all "Carpe Diem!" It was more a constant looking over my shoulder, peeking through closed drapes, and finding every adult extreeeeemely suspicious. Because very probably, they were just an alien wearing adult skin. 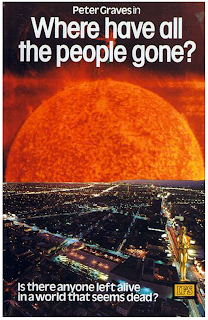 In specific, there was a lovely little film called Where Have All the People Gone? Seems some solar flares made everyone disintegrate and turn to white powder. Well, not everyone. Some people were lucky enough not to be effected by solar flares because they're awesome or because they happened to be in a cave when it happened. So they got to walk around and find piles of white powder in the shape of bodies...still in their clothes. Because everyone knows that solar flares with the power of disintegration do not harm clothes, silly.  I could be imagining this, but I seem to recall someone driving a wood paneled station wagon down a street filled with flat clothes with powder in the them, and then stopping, standing by the open door and screaming, "Where have all the people gone?????"  Also, I'm pretty sure all the dogs were crazy and wanted to eat you.

To this day, I cannot lay out an outfit of clothes flat on a bed without thinking of it.

I bring this up because this morning when I logged into Blogger, I was presented with a similar eerie situation. Every. Single. One. Of. You. was gone.

According to Blogger, I follow no one. Which is sort of bad ass in a Clint Eastwood way, but nuh uh, I do too follow people. But you're all gone.

So, pretty please, keep me from driving my station wagon out into the middle of the freeway and yelling and put a link to your blog in the comments?  And I'll travel around and find everyone else that is connected that I collected over the last five years. After I get done watching the entire movie, which someone has apparently put on youtube.

PPS - Huger foreshadowing...the the first five minutes, all the siblings and mom give each other come-hither eyes that kind of creep me out. But could come in handy for the regeneration of the human population.
Posted by Little Girl::Big Glasses at 9:11 AM 8 comments:

Neighbor Jane said if I didn't put up another post everyone was going to think I slit my wrists but I said I would never slit my wrists because it would get blood on my keyboard and I've seen what coffee with milk can do to a hard drive so there's no way I'd mess around with that.  Because I talk in run-on sentences with Neighbor Jane all the time.

Did I ever tell you that like half the people on my block are named Jane or some derivation of Jane? It's sort of hard to get used to but is way better than the cult-de-sac we used to live on where all the couples names rhymed. Brandy and Randy, Dawn and Ron, Nic and Rick. Although on that street there was also the coolest named couple ever, Harley and Twyla. I had to call the HOA about them once because the enormous flag they hung over their house was flapping so loud the babies couldn't sleep, but I've always hoped to use their names in a very Eudora Welty-esque short story about subdivisions.

Anyway, let me hereby report that I in no way shape or form have purposely cut any part of my body in recent months or ever including my wrists. I have fallen on my ass on ice at work like four times though, but I promise it was an accident almost all of the times.

And, not only am I not critically bleeding, I've actually found some things to not frown about.


Exhibit D:
Lastly, in a brazen act of selfishness and irresponsibility, I bought me a puppy, you guys. Because much like scarves or kick ass boots, one can really never have too many bulldogs.  Her name is Chowder Prudence but we call her Betty Pearl.  Chowder because it's just an awesome name. Prudence because my father called my sisters and me "Patience, Prudence and Grace." Betty because when you tell someone in a loud bar that your name is Penne, they say "Betty?" "Your name is Betty?"  And you say, "What? Nobody in this bar is named Betty, you freak, we're all 22 years old. What is this, an Archie comic?" And Pearl because she was born on Pearl Harbor Day.  So there, Nazis.  (That doesn't make any sense. I realize that, but I'm pretty sure we're not supposed to talk mean about Japan anymore.)

Thanks for waiting out the shadows with me. Here's to smelly trees, silly boys, porch swings and puppies.
Posted by Little Girl::Big Glasses at 3:18 PM 11 comments:

Posted by Little Girl::Big Glasses at 9:14 AM No comments: