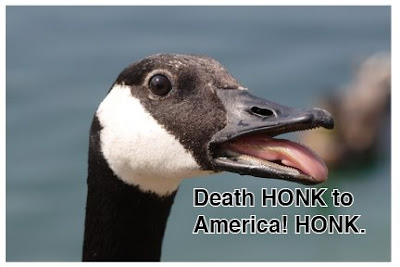 Probably everyone in the world saw footage of the amazing US Airways plane landing in the Hudson River yesterday. Well, everyone but me, because yesterday was the day that I make a 160-mile commute into the Land of No Radio Reception. Okay, that’s kind of a lie, there’s radio reception, there’s just not reception of any stations you’d really want to listen to. There’s a wide variety of Christian Rock – no offense against the Son or rocks, but I cannot handle grown men singing about their Love for Him for longer than a few minutes without wanting to throw myself into a fiery pit for all eternity if you know what I mean.

There’s also some farm reports, but hearing about grain futures tends to make me very sleepy, and there's, oddly enough, an AM station from 500 miles away with their totally cool “Swap Shop” program, which is like Craigslist for senior citizens and isolated folks with no Internet. It’s a call-in show, people describe what they’re selling (usually mid-70s Monte Carlo wheels, exercise bikes and broken portable air conditioners) then you leave your phone number. All the listeners sit patiently at their kitchen tables with pencil, paper, telephone and transistor radio and write down everything you’re saying just in case it’s something you can’t live without. I know this because my grandpa used to do it. But he usually got all the way through the person’s description and then crossed it out at the end saying, “Damned crook, it ain’t worth that.” I cannot listen too long to the Swap Shop very long either, because there’s no cell reception on the 160-mile commute, so I worry that I’m going to hear about the most awesome thing ever and not be able to call, and then I’ll spend the rest of my life in a deep depression searching ebay and craigslist nationwide for the person that got my thing. “My thing” is probably a 1968 Camaro convertible for $250. Or maybe a ‘74 Cuda for $275. Or a neat sweater. I DON’T KNOW WHAT IT IS, AND I AM NOT WILLING TO FIND OUT, OKAY?

So – while the rest of you were watching the completely amazing and awe-inspiring plane landing, with sweet little tugboats helping out, I was skipping around AM radio, hearing bits of pieces of the story from all manner of experts including American Idol Contender Ace Young’s Dad. He’s apparently a pilot,but what makes him an expert is that he was on the phone with Ace, yes, THE Ace, the Ace who almost won American Idol, anyway, his dad was on the phone with HIM while Ace watched it all happen out his NY apartment window. Which is pretty amazing, so it was kind of like hearing an eye witness report via cellphone.

Anyway, one particularly thorough report from NPR calmed all our fears by saying that although it happened in New York, and involved an airplane, there is “Apparently no indication of terrorism.” Really? Thanks, NPR. But you are wrong. You just don’t realize the horrible threat of evil terrorist GEESE. From Canada.

The plane went down because geese flew into the engines. Not one goose, accidentally astray from his V formation. Several Geese. Plural. Why would a flock of birds so recklessly toss themselves into an obvious death? People, do I have to tell you everything? Because the Canadian government has trained them to be Kamikaze geese. Tell me, what kind of geese were they? Canada Geese. No, not Canadian geese. They’re called Canada Geese. Because they’re OWNED by the Canadian government. And there’s two types, Greater Canada Goose and Lesser Canada Goose, so you can tell what their military rank is. (Look it up, it's totally on wikipedia.) They might as well have big freakin’ maple leaves on their wings, because they’re essentially warbirds for our “neighbors” from the north. Neighbors, my ass, they want us GONE, and they’re trying to take us out one poop-covered golf course at a time. They’re completely jealous of us, and everybody knows it.

Yesterday, their escalation plans became more apparent. They’re getting bolder. No longer content with simply filling the treads of our bike tires with goose shit so that it splashes up in gooey green stripes on our tshirts, they're trying to take planes down now. It’s scary, peeps. Another reporter on yet another station interviewed some guy from some organization that does nothing but count “bird strikes” to airplanes. Last year, there were more than 400 bird strikes on US Air Force planes alone. What’s that tell you? I don’t know about you, but I think we should put an immediate stop to importing LaBatts. And we should probably kick Michael J. Fox and the bald guy from Letterman out, too. Goose terrorism is only the start, my friends. Don’t say I didn’t warn you.

An update since I first wrote this…there is apparently now an attempt at a cover-up, because there are reports that “perhaps the alleged birds were not geese.” Whatever. Nice try, Canada.
Posted by Little Girl::Big Glasses at 5:00 PM