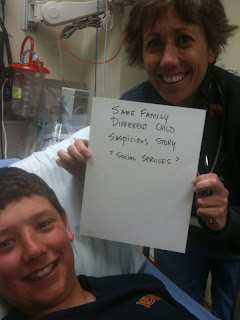 S
Not only a damned fine doctor, she's also
some sorta comedienne, apparently.
Don't know about the rest of ya's, but I'd be okay if we just stayed home and watched TV for awhile.
Posted by Little Girl::Big Glasses at 3:57 PM