Disclaimer: I am not one, but I love Barbies. Unless they are Lingerie Model Barbies, then not so much.

As a short person, I had a lot of toy cars, blocks, tinker toys, and even some baby dolls, but I never had a real true life Mattel Brand Barbie. My older sister did, and the coolest thing I could find about Barbie was the noise their legs make when you bend their knees back and forth really fast. What I did have was Barbie’s little sister, Skipper. I’m sure if I still had Skipper, she’d be worth loads of money, because no one except freaky Barbie collectors and me even know who Skipper is. Unfortunately, Skipper came to a slobbery end at the jowls of an odiferous basset hound named Towser, but for years, she endured me stuffing her behind the controls of numerous dump trucks and racecars.

In any case, Skipper was shorter than Barbie, and perfectly flat. Boobless, in fact. She had pigtails and freckles and plaid shorts and in my mind she was really probably much more fun at parties than Barbie. Skipper slouched, hung out with Ken and his friends burping and drinking beer and watching football…and even though the big K wanted to end his evenings in the Dream House, if you know what I’m saying, he preferred Skipper. Which of course, isn’t true at all, Ken was only hanging out with Skipper to get to Barbie, but whatever.

I am Skipper. I think my husband probably appreciates that I can get ready to go anywhere in less than five minutes, that my makeup bag is a Ziploc containing only chapstick, mascara and toothpaste. But sometimes I feel bad for him that he didn’t get a Barbie. Sure, he likes bragging that he got me a 12 gauge for Valentine’s Day, but deep down I bet he sometimes wishes I’d wear a bikini and heels while shooting skeet with him. Because, um, no. No I won’t. After all, WWSD? That’s right, she’d wear plaid shorts and bring a six-pack.

Turns out, though, some of my favorite people in the world are Barbies. My friend and neighbor Spanxy? Executive Barbie. My friend Pam-from-2nd-grade? PhD Barbie. Not saying either one would wear a bikini to the firing range, but they do bring home the bacon, fry it up in a pan and never ever let you forget you’re a man and all that. I think it’s interesting that they put up with me, although it has occurred to me that they only keep me around in case something breaks because they know I have my own tools and I can totally tell them what their husband is thinking. (Beer and boobs. He is thinking about beer and boobs. Everything else is just a means to the end of beer and boobs.)

The best example of a Barbie I know is my friend Cindy. Cindy owns more stilettos than Nordstroms. Oddly enough, her husband thinks flat clunky shoes are HAWT…but quite literally, Cindy is the Queen o’ Panties. She and her sister own one of the most successful lingerie stores in the fricking US of A. When Kathy Lee Gifford cannot figure out which bra to wear with her summer t-shirts and prim sundresses, she calls Cindy to figure it out for her. On TV. Cindy is Lingerie Barbie but she’s also Entrepreneur Barbie. And she still will hang out with me, which I don’t understand completely, but I’m grateful for. Anyway – she’s got billboards and magazine ads and catalogs of wispy but well-endowed women lounging about in their skivvies by jukeboxes or toasters or sofas and people see them and go buy panties by the dozen.
See Exhibit A: 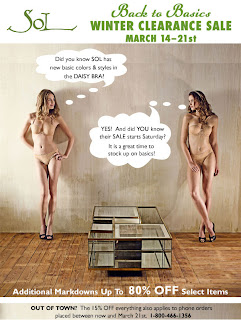 Because I actually lived with an underwear model in college, I 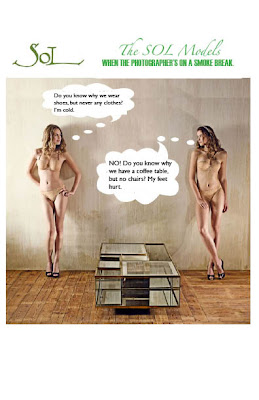 have special insight to their innermost thoughts. (Nothing. They think about nothing. Well, moisturizer. And People Magazine.) Oh, and can I tell you how extremely popular with boys I was while I lived with an underwear model? I highly recommend it.

Here for you, are the underwear models real thoughts....see Exhibit B:

Skipper would totally have a sweater on.
Posted by Little Girl::Big Glasses at 8:30 AM