I better get invited to the movie premiere.

Remember when I told you about my Sista-from-anotha-mista, Tracey? I met her on the interwebs and we become lifelong pals when we realized we both used to ride the exact same model of little badass little Honda crotch rockets instead of acting like nice girls and doing our homework. She even guest-blogged for me once when I was camping.


I even visited her in Iowa and it turned out we liked each other in real life and had exactly the same highlights. Because we were separated at birth. Or something.

Well. Did you know that if you walk into any bookstore, Target, Costco or Piggly Wiggly RIGHT NOW, you will see a book that Tracey wrote...right there on the shelf? Because you will.

It's called On the Island. Tracey got up early before work every day for a year and wrote it. And then she edited it and let me read it. And I sat down at my computer and read the Word document and did not get up until I was done. Seriously, not even for a beer.  Tracey pitched her book to publishers and they were all, "No thanks, we only like stories about vampires, not real people."  But Tracey, being the hard-working Iowa gal she is said, "Fine. I'll publish it myself, you clowns." So she did. And it looked like this.

And then, a funny thing happened. Real life people loved Tracey's book and downloaded it over and over and over again. Then guess what happened?  The publishers were all, "Hey, Trace - we changed our minds." And because Tracey is a nice person who would prefer to hold wine glasses to grudges, she said, "Eh, okay, fine. I guess you can sell my book for me." And they bought it and made it look like this.


I think the best part of getting a book deal, besides the obvious CASH part of it is that you get to have the back cover author photo taken. I've been practicing for mine since I was about 4, well except for the brief interlude in the 80s when I was practicing for my album cover, in black turtleneck and silver flugelhorn, ala Chuck Mangione. Because did you guys know I play the flugelhorn? Anyway, I totally digress. Check out SFAM's hot author photo.

So anyway, I am very proud and happy to know Tracey and thrilled to call her "author" and "friend" and it's really got me thinking...

I should write a book!

But what about?  Tracey had her characters floating around with her for years before she wrote about them. I don't have any characters in my head other than the ones that talk to me and tell me I left the garage door open and the iron on when I'm ten miles from home.

Maybe I could just design the cover first... then I'd be inspired to write the tale of the star-crossed lovers...


I've never been much a romantic anyway. I'll go with something I know about...being a weird little kid. I knew some, I have some, I was one. This could work. Maybe I'll start with the back cover instead. 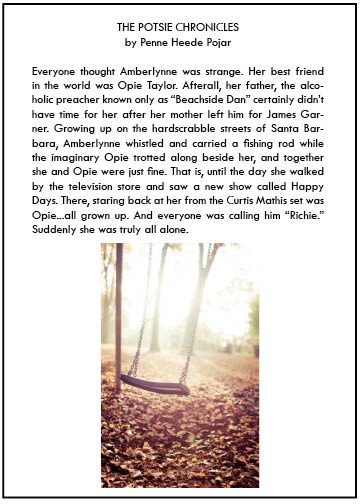 Or, maybe I should leave the authorin' of books to the professionals.  Congratulations to Tracey, who proved that hard work and belief in yourself, combined with some crazy good talent really pays off.

And thanks, too. Because last week I told my kid that I'd buy him an XBOX...unless of course, I could find my name in a book in the book department at Target. And then walked over to On The Island, opened up the acknowledgement page and showed him mommy's name in print. Ha ha, kid. Now go mow the lawn and earn your damned game like a normal person.