Gas up the DeLorean Marty, it was our density.

You know how in Back to the Future Alex P. Keaton (yes, I know he’s Marty McFly then, but I will always think of him as Alex P. Keaton) has a picture of his present day family, and as he goes back in time and starts messing everything up his family starts disappearing because he is changing the past, thus effectively changing the future? Yeah. That part. Anyway, this weekend I was flipping through an old photo album of stuff from high school and college and saw a picture of me in 1989 with a friend that I did not meet until 2004. I’ll wait while you go back and read that again.

Done? Did you get goosebumps?

Seems I was at a party on February 10, 1989 with my room-mate, we’ll call her “Puddin,” when the party pic guy goes by . Puddin sees her old friend from the dorms, yells, “Shelby Shoeshine, get yo’ ass in this picture!” pulls her and her friend into the picture and

(Or she's preparing for the future by guessing Shelby Shoeshine's cupsize. Not sure.) 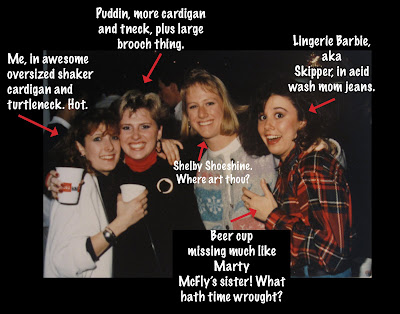