No longer content to blog about blogging, I am now posting about posters.

So I realize this happened awhile ago, so I’m coming to this party rather late – but Farrah and MJ dying on the same day was weird, huh? Two huge entertainment icons to be sure, but more importantly, two huge POSTER icons.

Remember posters? Not like reproductions or framed art prints. Posters. Like stupid cheap pictures you plastered on your walls to decorate along with fishnets with those glass balls and Greg Brady beads. Do kids even have posters now? My kids have framed stuff on their walls that I put there, because if I hadn’t put stuff there, there would be nothing there but flicked boogers and thrown shoe marks. Pottery Barn Teen and Restoration Hardware have pretty much ruined it for modern parents who can no longer just ignore children’s living spaces – we’re forced to make every room look like either Martha Stewart or Vern Yip just got done with them.

When I was in junior high and high school, EVERYONE had posters. Loads of ‘em. The more you had, the cooler you were. My friend Sheila had posters overlapping posters overlapping TigerBeat pages of Shaun Cassidy and Parker Stevinson and (gag) Scot Baio. I never really understood the Scot Baio thing. He was like a shorter version of Henry Winkler, and seriously? Henry Winkler as a teenage dreamboat? Uh, not working for me.

My friends Dorothy and Tracy had the most anal-y hung posters you would ever see. Whereas I slapped tape across the corners, these guys carefully reinforced the corners with invisible tape, then, after double-checking with a level, measured with a micrometer to exactly insert a pushpin in the precise corner of the tape reinforcement. I skirted the leveling issue by placing all my posters at jaunty angles, as if to say, “Screw authority, man! I hang my posters all crookedy on purpose! Mob rules!”

My best pal Pam had the quintessential poster of the 70s: A kitty hanging helpless by its front legs from a tree branch, her fuzzy little pink belly exposed to the whole world for the whole world’s amusement. What better relaxing sentiment for sleeping quarters? A young animal, inches from death. CUTE! Of course reading the caption “Hang on – Friday’s coming’” only reinforced the outright damned adorability. Decades later, I’d learn that my husband had the exact same poster in his room as a child. Only Pam’s was the nice rolled version, probably from Spencer Gifts, whereas my husband’s was the Scholastic Book Club version, which meant it had fold lines. Okay for kitty posters, not so good for Lynda Carter, which is who my high school boyfriend had on his wall, all decked out in her bitchin’ Wonder Woman costume. He also had Farrah, because every male child born from 1965 to 1983 had Farrah.

My poster inventory, circa 1983, consisted of this gem… preppy Michael, pre-extreme-plastic surgery and wearing Mom-jeans...

Also, a Rocky Horror picture show poster with this image and the caption “Don’t dream it, be it.” I totally had no idea what they meant by that. 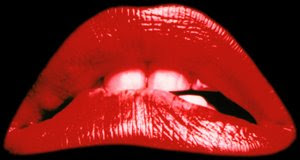 I was also the proud owner of a Walter Payton poster made specially for the Post Office to encourage 18 year old boys to register for the draft…I got it at, well, um…the Post Office. Oh hey - is it a federal offense to steal a poster from the Post Office? Because if it is, Pam did it.

Lastly, I had a Prince poster whereon he sprawled across a pile of purple satin sheets, his diminutive bare ass crawling towards the edge as if to say, “Hey! Buy this poster or I’ll stand up!” If I had a daughter who hung it in her room I’d probably accidentally use it as a drop cloth.

So my “artwork” was three black guys (one butt naked) and a transvestite movie. It is so hard to be a rebel in a small town. Without, actually, you know…being rebellious.

I always wanted the poster of the guy sitting in a chair being blown away by his own speakers but never got it. Now THAT is art, man. Seriously, even the lamp was at an angle. So how about you fives of people who read this? What adorned the walls of your teenaged lair? What did you want but never get? Yearning for a "If life hands you lemons..." or an autographed Joni loves Chachi? Still hanging on to a Nagel in your storage unit hopin’ they’ll become popular again? P.S. They won't.
Posted by Little Girl::Big Glasses at 6:00 AM