Yo, Dian Fossey. You dropped something. 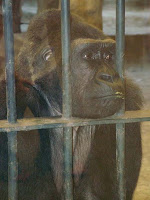 I'm assuming it's because I was raised by a practical farmgirl and an automobile enthusiast, but the first thought I have when someone tells me they've been in a car accident is not, "Are you okay?" but "Holy crap, how's the car?" It could also be because I'm a heartless asshole.

In my defense, if they were really hurt or dead, they totally wouldn't be calling me, because that's the candystriper's job but whatever.

In either case - I noticed this at some point in young adulthood, right around about the same time I noticed I was the only one I knew that said "supper, couch and billfold" instead of "dinner, sofa and wallet" and I've taken great care to always ask people first, "Oh, are YOU okay?" before ever checking on the condition of their vehicle. It has served me well, and currently, several people I know actually think I am kind and considerate.

So, when Big Dude called me last week to tell me he'd nearly gotten in a big gigantic accident, I tempered my curiosity and said, "Whoa? You okay?" Which I knew he was because: please reference the first paragraph, dead people don't use cellphones.  As I suspected, both he and the car were fine, because of his bitchin' defensive driving skills that he learned at motorcycle racing school kicked in and he avoided injuring both his truck and his cute bald head by swerving around a huge 10'x10' dog kennel that had fallen off someone's truck. Without them noticing. I know, happens all the time, right?

After I showed appropriate wifely concern, and determined that he was not in fact calling from his grave, I asked if there were by any chance DOGS in the dog kennel in the road? Because, dude, that would be weird, right? And kind of mean to dogs.

But there weren't. And I'm pretty sure Big Dude thought that was a ridiculous question, but I thought it was a vital factoid to have and also it would've been super fun to call the news channels and tell them about it. But there weren't. Bo-ring.

Later that night, I overheard him talking to the gigantic middle-schooler about it.

Big Dude: So. I had a harrowing experience today.

Kid (without looking up from tv, cellphone and a science book all at once): You did?   Wait.    A what?

Kid (looking up, worried voice): Dad? Heroin? You had a heroin experience...? Wha?

Kid (eyes back on the tv and stuffing a pound and a half of bologna smeared with mustard down his piehole): Oh. What is that?

Kid (texting twenty 7th graders an important message regarding meeting their true love tomorrow if only they forward this message to twenty other 7th graders):  OH! Harrowing. Yeah? Really. What was it?

BD: Well, I was driving down the highway and there was a huge cage in the middle of traffic, just sitting there and...

Kid: (dropping cellphone and coughing up a box of Girl Scout Thinmints):  Holy Crap! Was there an ape in there?

BD (wishing we didn't have the Cartoon Network and that he'd married someone nicer to pass genes along to his offspring):  No. No, there was NOT an ape in there.

Kid: Then why was the cage there?

BD: It just fell there. In the road. Someone left it.

Kid: Without the ape?

BD: Don't you have homework or something?
Posted by Little Girl::Big Glasses at 2:58 PM