Gently down the stream.

The giant linebacker kid is taking a year off from football and has joined the crew. As in rowing. I was going to say "crew team" but that's kind of repetitive. Like a neighborhood I once lived in called "Table Mesa" which is not only dumb, but stupid.

See how I did that? Try to keep up.

Four nights a week, I drive the hulking man-child to a reservoir 30 minutes from our house and he runs and jumps rope and works hard to glide across the water and make it look effortless. I think it's really the most beautiful thing in the word to see 8 people moving in synchronization on a skinny boat (or 4, or 2) and I'm proud he's taken it up. I've done it purely amateur-ly for several years - and only in a single scull because I am very muchly not a team player.  I'm glad that he's got the mental and physical fortitude to try something unknown - and I must admit that it doesn't suck to live vicariously through your children - something I haven't really experienced while watching him cream the living hell out of offensive linemen.

To make things even more bettererer than just watching the kid, he's competing this weekend 18 hours from our house at the Head of the Des Moines.

Which means, I not only get to see my boy living out my dream... 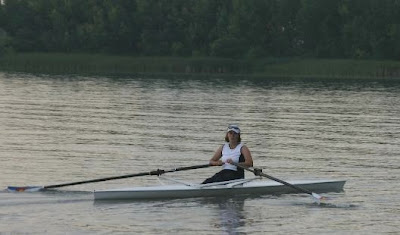 Me on a big ol' trainer boat a long time ago. It's very difficult to take pictures of yourself sculling.
I get to see my high school partner in crime from high school who lives nearby... 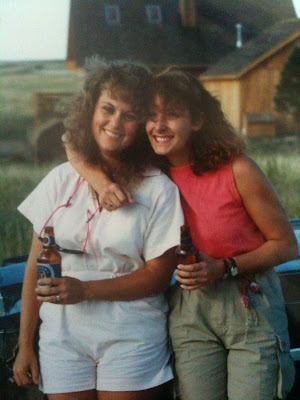 Partner in crime, circa 1990. As if you couldn't tell by the perms.
And I get to meet my sista-from-anotha-mista, Tracey, who I've never seen in person but I am pretty we were separated at birth, who...can you even believe it...lives right smack in Des Moines. 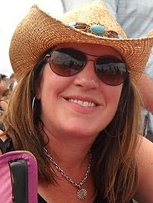 She looks sorta fun, huh? I'm taking sturdy drinking shoes.
It is so freaking fate, destiny, coincidence and good luck that I cannot fathom it. We're going to Oktoberfest together. In Iowa. Talk about living out dreams.

This is obviously Karma's way of apologizing for smashing the hell out of my face last month.