Hello, you weasley little bastard. You really think you can make yourself at home in my kitchen and have me not notic 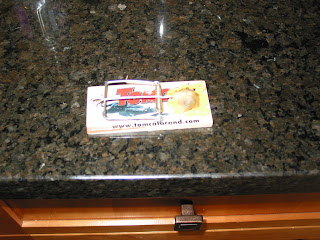 e? Or did you think I’d just make a batch of brownies and leave them on the counter for you?
Perhaps you’ve not heard from your peeps about the “Great Rodentia Dachau Reenactment of 2007.” Let me remind you. It had been snowing for days. Your third cousin Mervin and his missus had been huddling in the garage trying to stay warm. She was ready to deliver, and they were both worried that the hostile and dangerous environment wouldn’t be good for the children. One day, he saw his opening behind some loose mortar, and after much scratching and clawing, he and the little woman made it into the house.

They were amazed by the sights, sounds, smells, and huge bowl of bulldog nuggets by the door – free for the taking! It was mouse nirvana. They made their home under the stove. There was a veritable ladder system behind there allowing easy access to all kinds of delicious oven-drippings, as well as a toasty place to bring yo’ baby mama when she’s ready to drop the next litter. One Saturday as I prepared to bake a chocolate cake, Mervin, all pumped on the good-life and fatherhood, gets all ballsy and waddles out into the middle of the kitchen. He looks up at me and belches. The tiny breath wafting from his whiskered lips smelled vaguely of bulldog nuggets. He smiled, scratched his belly, then returned to his Shangri-la in my Viking range.

It was at that moment I turned the oven to 500 degrees and flambéed his fuzzy ass along with those of his entire gene pool. Later, I spent tens of dollars on expanding spray foam which I used to liberally seal the entire house. Not a wire hole, pipe or crack went unfilled. I had destroyed the enemy, secured the perimeter and it felt good.

But you. You’ve found a way in. The torrential rains have made you a super intelligent mouse, with extreme crevice-finding abilities. And then, after discovering the only orifice not controlled by a doorknob, you’ve stumbled upon my kitchen. But I knew you were coming. I anticipated your arrival. I wanted you to feel at home, so I left you a tiny morsel of bulldog nugget on a death trap under the stove. Which you stole. Without the trap going off.

So, tonight, I present you with a lovely last meal of raw chocolate chip cookie dough. Gnaw it baby, gnaw it good.