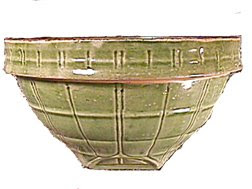 This is an antique Nelson McCoy Windowpane Yellow-ware bowl that was made in the 1920s. Our house was built in 1922, and I think both are great representations of solidity, craftsmanship and form marrying function. It is valued at approximately $130. The bowl, not the house.

When I bought the bowl for $18 in one of those antiquey mall places with a zillion booths, I didn't know any of that - what I knew was it was green, and it was square. I have a thing for green pottery. Not a big thing. Just a thing that I like it, buy it, bring it home and then go, "OH, I kind of own something almost exactly like that." I do the exact same thing with tennis shoes.

The square obsession is different. I just prefer the square when given a choice of shape. They're symmetrical, they have pointy corners, they're not all prissy and rounded and all that. So, when I came upon a bowl - a round thing - that is sort of square, with squares all over it, wow. Had to have it.

I intended it to be a water bowl for the bulldog, but decided after bringing it home that it looked better on the buffet in the dining room than on the kitchen floor. And I am so glad that I did - because shortly after moving it, I came to know the most important feature of this bowl.

When you walk by, the square base wiggles on the buffet, ever so slightly, and sounds exactly like the synthesizer and bass line intro to White Lines by Grand Master Flash with Melle Mel. This lends a funky old school rap rhythm to my ENTIRE DAY. I am convinced this is what the original craftsman had in mind when creating it in 1920-something. With a cool backbeat in the forefront of my cranium, it's impossible to feel frumpy and 41. Even if my day consists of sciattica pain and driving huge offspring to middle school. Am I square, like the bowl? No, brother. I am not. For inside, I am superfly with a sweet beat. Rang dang diggedy dang di-dang.

PS - When fact-checking for this post, (eg: how to spell Melle Mel) I came upon this youtube post of a guy wearing stripey pajama bottoms in his room playing the bass to the GMF recording. For some reason, it's more entertaining than the original video to the song, maybe because I'm secretly happy that I'm not the only person with a soundtrack to life that was written in 1983. Get higher, baby.