Flashback Friday. If they'd had Facebook in 1922, this would totally be my Great Grandmother's profile picture.

I had the very awesome fortune to have the coolest great grandmother that ever walked the planet. I could go on for days and days with stories about her overall wonderfulness.

Like how she lived for 99-1/2 years flirting innocently with any male I'd seen her around for 90 of them, including my dad and husband. How she memorized sports statistics and the children's names of celebrities and newscasters. How she was a baseball fan and if she wasn't at a Denver Bears game, she was listening to it on the radio, how she played dominoes and Yahtzee to "keep her mind sharp" and it worked because she lived on her own in her own house until a few months before she died. How she was the stepmother to my grandmother, but accepted her as daughter - even though they were just 15 years apart. Never mind that she divorced my grandmother's father, she kept my grandmother as her daughter for the rest of her life. My mother held her so dear that I have her first name as my middle name, and if I'd had a female child, I would have named that child after her.  My parents were married at her house. The first New Year's Eve I stayed up until midnight was at her house and I wore her bathrobe the whole night. I was six. The robe was way too big.

In short, she rocked. And I know that she wasn't just a cool old lady, because I have this. 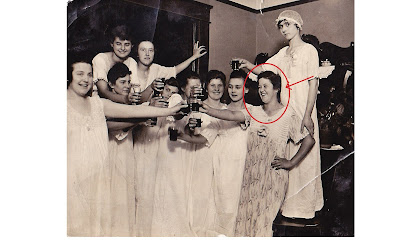 "To nightgowns!"
You'll notice she's the only one stylish enough for a floral nightgown. Look at all the losers in their boring white. And she's the only one laughing. She was always laughing. This was in a young ladies boarding house she lived in with what appears to be her sister and a bunch of lame girls who are apparently worried about Prohibition. Party on, Great Grandma!

Here she is at age 98, with her great-great-grandson, my oldest little dude. 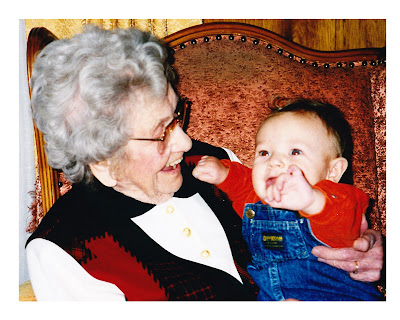 Still laughing. And cracking up a 4 month old.

The day I took this picture, she told me, "Don't have any more kids. It'll kill ya." She meant it, but I didn't take her seriously, because when I was 15, she told me, "Never learn to drive!"  When I said, "but I want to, Great Grandma!"  She said slyly, "But if you don't learn to drive...the men will HAVE to take you with them..."

Interesting ploy. If only she'd said, "If you don't learn to drive, you'll never have to go to the grocery store."  Now that would've been some helpful advice.
Posted by Little Girl::Big Glasses at 1:42 PM