Get outta my dreams. Get into my car.

Okay, I wasn't going to tell you guys this because I didn't want you to be all, "Hey - take me for a ride on your buttery soft heated seats, baby," but then Kimmie Haha showed her new badass Land Rover on her blog and since I am fiercely competitive cannot compete with her artistic endeavors which include painting bulldogs AND belonging to art guilds for Pete's sake, I decided to post a gratuitous photograph of my own bitchin' new hooptie, which was likely the only Toyota sold in the United States in the month of February. You're very welcome, Toyota employees. 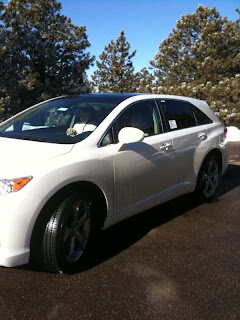 Lean, mean, grocery-gettin' machine.
(With friend Jane in passenger seat.)
(We were not really parked on Make-out Hill,
it just looks that way. Clean it up, people.)
You may recall that my previous vehicle was consumed, in its entirety* by squirrels. Therefore, upon parking the new ride, I took out a full page ad in the Nutty Bucktooth Gazette to let them know that my children have firearms and are not only trained to use them, but are compensated richly for bringing they Mama squirrel carcass.

And so far? All's good. Except for the one wiseass squirrel that apparently stole a rhubarb pie while it cooled in Aunt Bea's window and then hung in the tree above said new car with a Sports Illustrated for a couple of hours. 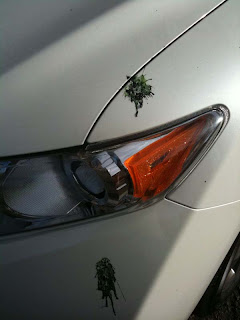 I can't have anything nice.
*That thing about them eating my old car in it's entirety? Not completely true. The bastards only ate the electrical system. Because they're from the devil. And also I am prone to exaggeration.
Posted by Little Girl::Big Glasses at 2:00 PM