Yesterday I mentioned a few things that traumatized me/pissed me off/grossed me out/ to the point where I couldn’t write for a couple of days. I realized later that I totally skipped a biggie. I GOT BANGS.

I have not had bangs for a loooong time. Mostly because I hate tickly crap touching my face. A combination of every-season seasonal allergies and just plain curmudgen-ness, I find stuff touching my face annoying. Having all one-length of hair makes it easier to stuff it in a baseball hat, ponytail, braid, baling wire, whatever. Recently though, as I sat around a table with Lingerie Barbie, Spanxy and Trustfund Barbie, it seemed to me that I was decidedly older-looking than the rest of the gang, and my only out was the seductive Botox, or her cheap little sister: Bangs.

I am not the type of person who cries over haircuts or broken nails. I figure they’re both renewable resources, so when I went in for my regular appointment to have my gray racing stripe died a youthful golden brown with honey undertones, I told her “Gimme bangs.”

Lisa, the color-wizard who has been single-handedly caring about my hair (because really? I’m not all that interested) for the last 10 years, was thrilled, but skeptical. “Are you serious?" she asked. "Because they’ll totally touch your face. Also, you’ll have to come in more often than every seven weeks to have them trimmed. And, did I mention, they’re going to touch your face?” I waved my hand without looking up from the fascinating story of Valerie Bertinelli’s weight loss and single glass of champagne splurge a week and told her to go for it.

I left with a sleek, multileveled long ‘do and sweeping flat bangs. One word: HAWT. By the time I drove the 2 miles home and walked up the steps, it had increased to two words: Carol Brady. But still sort of cute in a 1970s throwback vintage hair way. By the next day, however, when I’d washed it and dried it all by myself. Um. Kind of like I’d cut it myself. Turns out I have a wicked cowlick where those sleek bangs go. I cannot sleek them regardless of method. I’ve put in “product,” pulled them, duct taped them, everything. They look redorkulous. They curl perfectly into my right eye, which is not as coy and cute as you might immediately imagine. It's more like I have 433 tiny hairs poking the shit out of my eye all day. Another amazing side effect of being this fashionable is that having one eye covered blocks my vision a bit and totally throws off my depth perception causing me to run into no less than three walls in the past two days. No, officer, my husband is actually a really nice man. I just have a black eye and shoulder because of these damned bangs. No, boss. I'm not drunk at work, I just can't frickin' see where I'm going. But check it out - my forehead looks younger, right?

Also, if you hadn't guessed, the little wispy bits are totally touching my face. Spanxy says I need silicone spray and a flattening iron. I say I need a baseball cap for the next four months. At least then I’ll look like an 11 year old boy instead of a 40-something wrinkly person with Carol Brady hair. I'm also considering pasting them straight up with Aquanet and wearing a bandana around my forehead and going out tagging at night with my loco homegirls.

In other news, even though my father claims to be retired, I have a concrete evidence that he’s actually moonlighting as a copywriter for Winchell’s Donuts. Behold. 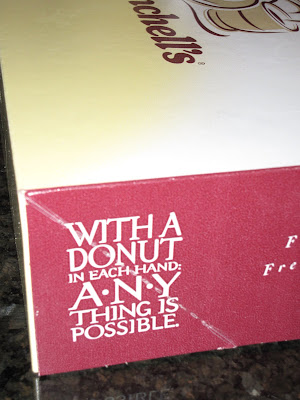 Truth in advertising, baby.
Posted by Little Girl::Big Glasses at 9:18 AM