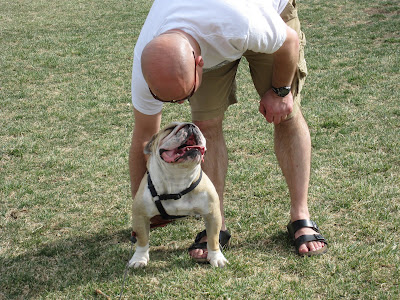 We have two labradorks that the Big Dude Little Glasses uses for bird hunting although they believe their real purpose is to make sure that no one steals the furniture and they insure this by sprawling their ginormous bodies across it at all possible times. After several years of living with these two and their bald headed friend, I got used to the three of them so it seemed weird when they'd all leave to go hunting and I'd be home alone with nothing slobbering or panting near me. Also, he'd take the dogs.

I decided that what I needed was a house dog. But not some silly little floofy ball of fur...a sturdy dog with the highest levels of dignity and strength. But one that wouldn't hunt or jump on furniture, and preferably one that was too short to ever be fascinated with the crotches of houseguests.

I chose the English bulldog. I shopped for months until the perfect puppy was born, and then I paid for him to be flown here from another state. I named him Tater Tug Don't Hunt. (Tug for short). I took a week off of work to acclimate him. I trained him. I walked him. I made him MY dog. Only problem is - he made the Big Dude his person. He is IN LOVE with the Big Dude. And, the Big Dude loves him back.

They say that people look like their pets, so I really should've known better.
Posted by Little Girl::Big Glasses at 8:12 AM