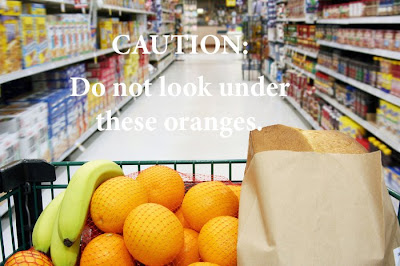 Men seem to have a running joke about being sent to the store for feminine products. I realize that there’s probably lots of women who do send their guys off for products specifically never designed for a man to use, and plenty of men who probably don’t even mind fetching them up in the name of love or fear, but I’ve never sent my husband to the store for ground beef, let alone personal items. I find it somewhat horrifying to purchase certain things for myself, and I just wouldn’t want to put anyone else through that – especially considering that even though we live in a major city, we’re in a somewhat smallish community where you see the same people everyday at the school, or the drugstore or the SuperTarget and I can’t imagine sending the Big Dude off for say, let’s call it “MASCARA” and him running into my boss or the neighbor who would either think, “Wow, he’s whipped,” or “no wonder she was such a bitch today” or “think he cross-dresses?”

Since I’ve done personal type shopping for myself all these years, I’m very good at buying items larger than the “MASCARA” first, then dropping the “MASCARA” down in between them, then quickly finding something larger to put on top and then waiting in the only line that doesn’t have a pimply faced twenty-three year old checker guy and hopefully no one I know behind me. All that said, my husband could care less about sending me off for 18-pack of cheap grocery store beer or his newest beverage of choice: SlimFast. I’ve gotten used to the looks of pity and “oh, poor thing” that I get when I purchase a big ol’ box of the grocery-store strength Silver Bullets, but I really cannot take the baggage that goes along with the SlimFast.

The Big Dude is IN SHAPE. He has like 3.5% body fat. He belongs to a gym and goes to it. Every day. And then, after he gets home from the gym, he goes running. He does not need diet shakes. The only reason he’s buying these things is because he likes them for breakfast. They’ve got protein and calcium and vitamins and all those other things healthy people like. Sure, there’s a bunch of sugar, but dude, when you work out twice a day, who really cares? You could melt a King-size Snickers in your coffee and not feel it. Which is why, if HE bought 8 SlimFast shakes no one would give a second glance. In fact, it would probably be an excellent testimony to SlimFast. He could load up his cart, walk around the store and within minutes, they’d be sold out. Everyone in there would be all, “Dude. Those things WORK. Which aisle, man? What’s yummier, French Vanilla or Strawberry Dream?”

BUT. When a normal sized person who does not work out twice a day and in fact maybe works out twice a week in a good week and could probably stand to firm up a little bit around the mid-section walks around with a cart full of diet shakes…it’s embarrassing. People look into my cart, see 20 cans of beer, 8 cans of SlimFast and shake their head at me. They’re instantly sizing up everything on the top level of the cart. “Oh, cinnamon rolls and ham, huh Fatass? Bet you parked as close as you could to save energy to get to your precious cookie dough, right? It’s about choices, Tubby, and you’re making the wrong ones.”

I’ve been doubling up on my fruit and vegetable purchases just to hide the kids’ pudding and avoid the scorn of my fellow shoppers. Last night as I raced through the aisles I had to avoid not one but TWO male neighbors who were also shopping. Because if they saw I had them, my only choices would have been to sheepishly push a box of super size “MASCARA” over the SlimFast or sell out the Dude. What I don’t do for that man.
Posted by Little Girl::Big Glasses at 6:00 AM