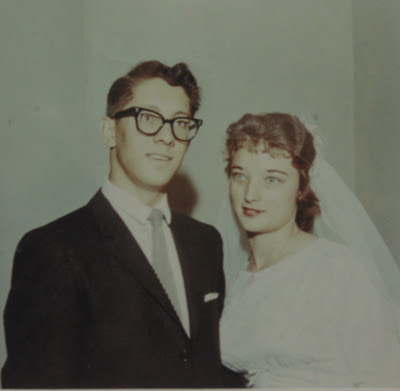 Forty-nine years ago today, my parents were married. And today, they are still married. To each other. Which is either an amazing testament to true love or unabashed stubbornness. (I reference a magnet on their refrigerator that says, “Divorce – Never! Murder – Maybe. I have suggested they remove it just in case, you know.)

So it was a spring day in 1960. There would’ve been crabapple trees blooming and violets and pansies bursting out ready for summer. The bride wore a cute white knee-length dress with a lace up bodice and midlength sleeves. She had clear acrylic peep toe slides with white high heels. It was good luck to put a penny in the bride’s shoe but no one had a penny, so they used a dime. The groom wore a slim black suit with pinstripe tie and smelled of Wildroot Crème Oil.

The ceremony and reception were held in a little brick duplex on South Clarkson Street, near Washington Park in Denver. It was her Grandmother’s house, and they were married in the dining room. The best man apparently got lost or otherwise didn’t make it and a female friend stood in for my Dad. (I’ve always considered this a great literary device as he was raised by a single mother and had three daughters and a sister, and in the movie of his life it would be an awesome sort of plot twist/foreshadowing/irony/dénouement something or other that he's always been surrounded by a harem.) The guest list included her parents and younger brother, his mother and younger sister and her Grandmother and maybe a few friends, but it was certainly small. There were no limos or band, no engraved invitations or wedding coordinator. Just two kids getting married and meaning it when they said, “Until death do us part.” They were 19 and 21. And apparently, plenty old enough to take it seriously. They honeymooned for the weekend in a little mountain town and then it was back to work on Monday.

They met a year or so prior. She was still in high school; he was a cool older guy with a leather jacket and a record player. He and a buddy crashed her high school dance because his buddy had a crush on her. But the cool quiet guy with the glasses got the girl.

By 1970, they had three little girls, a house, a business, a dog and a shiny Plymouth.

By 1980, they had three big girls, one a high school graduate, the other two weighed down with massive amounts of eyeliner and homework. There was a basset hound, an old farmhouse and two acres to spread out on. She let him buy cars; he cried when his wedding ring fell into a cement mixer and we all went back to work to help him find it. He did.

By 1990, they trekked across the country to start a new and different life without kids and surrounded by palm trees.

By 2000, they had three grandsons. They started riding bikes and walking together, they rescued doggies and welcomed a daughter to their Sunshine State.

In 2009, there are three grandsons and two granddaughters. They cared for both of their 90-something mothers for years and buried them within a few days of each other. Things have not been easy always, but they’ve not been impossible. Because at the end of the day, neither of them had to worry that they’d be facing life alone. If there’s nothing else to believe in, they really do believe in each other and the commitment they made 49 years ago.

They are still married. They still have the Plymouth, the dime from her shoe and each other. And despite my grandfather’s tears at the wedding and thirty years of insistence that it would never work out because they were way too young to get married, I’m kinda thinking it’s going to last. A lot of love, and a pinch of spite, perhaps.

PS - Geez. Take a look at their bangs. No wonder I have a cowlick.
Posted by Little Girl::Big Glasses at 8:44 AM