Hello little blog. Sorry I’ve been away. I know that you’ve probably not missed me at all, or my liberal use of commas and made-up words. Anyway, I’m back.

Thought you should know that while I was away several things occurred which I PROMISE I’ll write more about this week. Probably. Maybe. I’ll try to. They included:

1. A person who weighs as much as I do vomited on me from above.
2. The delightful overnight attendant at Kinko’s took my “Call me if there’s anything you need” literally and rang me up at 4:15 am to see if it was okay that he processed my order one hour EARLIER than he originally promised.
3. I drove 160 miles for a meeting that had been cancelled. “Oh? Did you not get the email?” Um. Nope. Didn’t get the email.
4. Did I mention that someone my own size (not a cute little baby with tiny little cute throwups) MY OWN SIZE threw up, or rather, DOWN. On Me. From above.

After a long weird week it was Mother’s Day. And for all their faults (like for example, throwing up/down on me) I have some very cool children with a great daddy who always make sure I have really nice Mother’s Days. This year featured a lovely breakfast of cheese omelet, bacon, toast and mimosas. The nine-year old was waiter and server, the 11 y/o the chef, and daddy was bartender and sous. It pretty much rocked, although they were perhaps a bit overzealous in their grocery shopping – I found two gallons of OJ and three…THREE bottles of my very favorite proseco for the mimosas. What were they thinking? I can’t drink three bottles of proseco in one day unless it's Thanksgiving. Sillies. 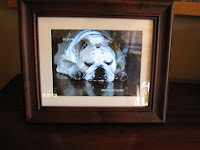 My gift was a potted calla lily and this here digital picture frame which I loaded up with bulldog photos mixed cleverly with the preloaded photos of people I don’t know getting married and going to Hawaii. I like having strangers' photos popping up in the dining room so when company's over they can say, "Oh -who is that lovely couple?" And I can make up good stories about them and how they done me wrong and that's why you never see them around here no more...and then I can look kind of sideways at them, like Clint Eastwood, and say, "You know what I mean, don't you? I think you do." And then those people will be kind of scared of me but also totally impressed and want to hang out with me more since I'm mysterious.


I also received these lovely handmade notes from the boys: 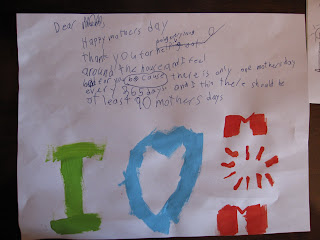 From the nine year old. I like that he uses proper proofreader's marks. It says:

Dear Mom Happy mothers day Thank you for helping out (deleted) doing everything Around the house and I feel Bad for you BECAUSE there is only one mothers day Every 365 days. And I think there should be At least 90 mothers days I (heart) MoM

And he didn't bother to sign it because he knows he doesn't have to since he's the only one around here besides me that uses proper proofreader's marks. Also I've inflicted more guilt on him, and that's obvious by the content.

mosT peoplE would fold thE paper thE otheR waY, anD writeE oN thE “toP”, and only puT capitals aT thE beginning of sentenceS, anD spelL evrithin jusT righT. i brokE awaY from thaT jusT to shoW speciaL and rarE YOU are. You rock! (after reading this message, please begin taking dabs at your eyes. PS I hope you didn’t read this part out loud.)

He obviously gets his weird sense of humor from his father.

I was then treated to a performance by "Velvet Elvis" – a local performer who says he knows he doesn’t look like Elvis…he looks like a PAINTING of Elvis. And we took my mother in law because I try to instill in my children that you should be nice to your mommy even when she’s old and insane and won't get a job even though she's completely capable and has a nursing degree and she's not even all that nice to your wife even though your wife gave her two perfect grandsons. Because that's the right thing to do. Also I'm covering my own ass for the future. Call it insurance.

And that was my day. Around 11 pm Eastern time, I realized I'd not even gotten ahold of my own mother so I sent her an email. Which I am pretty sure is the equivalent of scribbling a note on printer paper. At least I didn't puke on her.
Posted by Little Girl::Big Glasses at 12:14 PM